Right now Jeremy’s tired and a wee bit grumpy, staring at their bagel as if they’ve never seen one before and aren’t quite sure what to do with it. But, even now, they’re more here than I’ve seen in a long time.

Two weeks ago I took Jeremy to the hospital in desperation. Their anger was getting worse, their depression was deepening, and the cycles between didn’t end. I asked if they wanted to go and was floored when they said yes.

It was a long day. A psych evaluation via the emergency room always is. Jeremy was seen by triage, two nurses, an emergency room doctor, a psych nurse, the psychiatrist, a phlebotomist, and whatever the technical term for the person who runs the EKG machine. At the end they came out with a diagnosis of “likely bipolar” and two new medications.

The downside to the medication is exhaustion. We’re not sure which pill is causing it, although right now Jeremy’s leaning towards the blue-green pill, Latuda. Which explains their glazed stare at the bagel. The upside is watching Jeremy return with their quirky sense of humour and innate kindness. They joke around with their younger cousin, head out for walks with me, snuggle the cats, and chat with their grandparents.

Jeremy got their final inheritance from their grandfather on Wednesday and on of their very first purchases was a netbook for me. It’s cute, tiny, and has a blue cover which reminds me vaguely of both Tetris and Lego.

“You deserve it,” Jeremy urged.

It wasn’t expensive so I accepted. 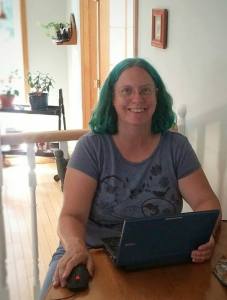 Me at my parents’ house with said netbook

Jeremy also bought themself a laptop off Amazon, a shiny red one with a terabyte hard drive and a quad core. Now they just have to wait until the 15th.

The main part… the good part is I have them back. 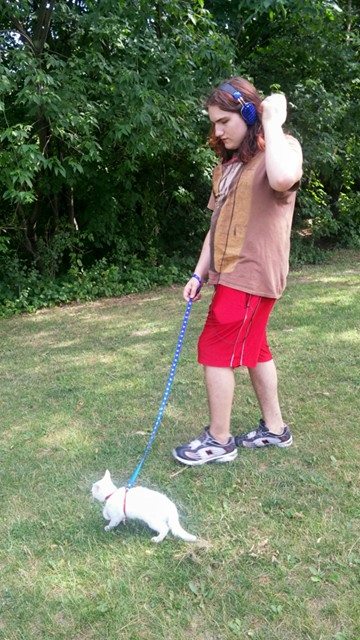 Jeremy walking Lara while rocking their second best headphones. The best, from B, were charging at home.