Update: There is now a GoFundMe for Maddie and her family to move to Houston. Please click here for it!

Twelve years old, that boundary year, the line between childhood and teen. Still young enough to play on the playground but old enough to start worrying that the slide and swings are a bit uncool. The age where they’re cool in groups but going home to play Minecraft, Barbies, and lego. An age of innocence. And an age where grown adults think nothing of using the slurs of “it”, “half baked maggot”, “thing”, and “the transgender” if you’re not cisgender and/or straight. The adults also refer to a gay teacher as “the queer teacher” and want to get rid of them both, the teacher and twelve year old transgender girl Maddie.

These so called adults have children of their own and not an ounce of empathy between them. They cheerfully choose which children of theirs who will kick “his” ass in the bathroom with the ultimate plan of running her and her father out of town. 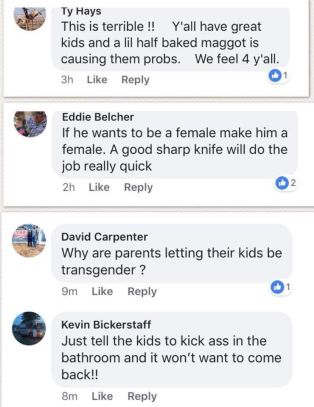 Not even half an ounce of empathy

The child in question usually uses the staff washroom, which isn’t a surprise considering the attitude of the locals, but couldn’t find it in the new school and used the girls’ room once. That was enough to get these junior high wannabe adults blathering and egging each other on.

People act like bullying is a childhood issue and forget the kids are learning it from somewhere. This is simply more blatant than usual. How do you think they’d treat a trans adult who dared to move into their town of 492 people?

If I were her parents, I’d be moving as quickly as I could. The townsfolk would think they won but they’re like the apocryphal chess playing pigeon. Strutting around shitting everywhere, acting like they won. Meanwhile the family would be in better surroundings with better people. They could hardly find worse, no matter what the townspeople think.

What Seth doesn’t realize is that, overall, 70% are supportive of trans people, wanting the government to do more to help them. Half the population of the States believes they should use the washroom of their gender and 61% in Canada. Seth’s an outlier, a dinosaur in wait of a meteor strike.

I’d love to have a happy ending to this post, everyone loves a happy ending, but the reality is a child is stuck in a town where she is seen as vermin to be destroyed and not a child to be supported. A child who’s in hiding, along with her siblings, for their own protection. All I can suggest is to support the people you know and the people around you. If you see someone who’s trans, simply smile like you would to anyone else. Stand up for her (or him) if she’s being hassled. Be there.

If that’s not enough, you can buy “you can pee next to me” pins. I know there’s a similarly phrased one and I’ve totally lost the phrase. If you know it, feel free to remind me. There are groups like Transgender & Allies Circle of Trust where people offer, in part, support and empathy to newly out trans people. You can attend your local PFLAG meetings and find out what’s happening with the LGBTQ community in your area. They openly accept allies. And you can stand up to people like Seth and Eddie and Kevin. People who think nothing of attacking and harrassing a 12 year old.

2 thoughts on “When school isn’t safe…”