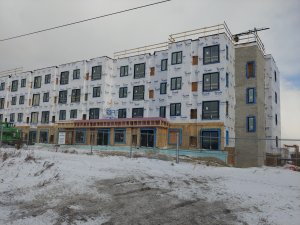 Yesterday I got the news I’ve been hoping for. My name is 100% for sure on the confirmation list for the new building and I’ll be moving sometime in August. They can’t specify any more than that because, as you can see, the building isn’t finished and I’m sure they’ve got tonnes more to do inside too.

Colin’s picked out the building he’d like to move to and will be putting an application in on Monday. We also sat down last night and worked on an application for Value Village. Next step is to make a resume.

The one thing we’re struggling with is the Go Fund Me. So far he only has two donations. Apparently I’m not good at this asking for money thing. I’m happy with the money he’s got but it won’t cover last month’s rent and he needs that. The apartment he’s looking at is $895/m and he needs it up front. I’m not expecting huge donations, a hundred $5 donations is $500, so anything can help. I’ll be linking his Go Fund Me me to every post from now on until he a) has enough money or b) is moving. I’ve been sharing his Go Fund Me more on Facebook but even there is going to increase. I hope people understand. This is so anxiety inducing for both Colin and I. We thought we had years before I got up to the top of the list and now we have months. I keep telling myself it’ll be worth it when it’s over but that’s hard to believe when my heart feels like it’s doing the mamba.

And, with no further ado, here’s the link…