I started shopping at Dollarama before Colin was in school and got a job there, which people joked was simply a way to fuel my shopping addiction. I certainly went home with at least one bag of purchases after every shift. The love affair has slowed down but hasn’t gone. I still shop there once or twice a month. 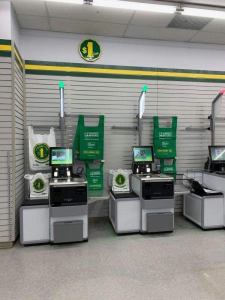 I was at our local shopping centre on Friday to meet with friends and buy my bus pass and decided to stop in at the Dollarama there. Thankfully it wasn’t busy and I quickly had an armload of goodies to buy (and of course I didn’t have a basket because I only went in for two things). I got to the front of the line then turned automatically to the cash counter and all the registers were quiet, there were no cashiers at all. What? Then a store employee caught my attention and directed me to a bank of self serve cash registers.

I stood there for a moment. I don’t like those machines and usually refuse to use them but I had that armload of goodies and there was already a line behind me. So I used the machine and left but I’m not going back to that location. So far there’s still cashiers at my current location but, then again, there was at the shopping centre last month. If they switch to only self serve, I’m not shopping there either. If they all switch over then, well, I’ll miss Dollarama but c’est la vie.

I remember in the 90’s, going to the bank and standing in the line for what felt like forever. Then they brought out automatic tellers and suddenly you could take out your money in a matter of minutes. Then came debit and you didn’t even need to take money out. And now tellers, which used to be a stable job, are becoming a thing of the past. I can see the same thing happening with cashiers. Why hire four employees to staff your cash registers when you can hire just one to supervise people at the self serve checkouts? That’s three wages you don’t have to pay.

Loblaws isn’t that bad but Walmart routinely tries to encourage me into their self service area. First by getting rid of their express lanes, they’re now a second self serve area, and second by having people urge me to go there. I always politely refuse. I saw a joke earlier with the tagline of, “No thanks, I don’t work here”. Maybe someday I’ll use that.

We’ve lost so many jobs already through cheaper wages overseas, automation, obsolescence, and computerization. We don’t need to let retail jobs slip away too. So many people’s jobs are at stake and all because of those tiny, little machines.