My name is Kathleen (formerly known as Michelle). I am technically middle aged although I’m planning on living until I’m at least 100 so I’ve got one more years until I reach the halfway point.

I’m an atheist and a vegan and my favourite colour is teal. Well, not really. My favourite colour is iridescent but I’ve been told by umpteen billion people that’s not really a colour so I just say teal now. I’m a  panromantic asexual (complete with five cats). I described myself as boring once and was promptly told I’m too colourful and sparkly to say that, which is one of the nicest things anyone’s ever said about me. In real life I’m the person who says “hi” every time someone enters a room… even if I’ve already said “hi” to them six times in the past hour. I tend to wear lots of bright colours, mismatched socks, and my running shoes are glittery. I’m autistic and struggle with major depressive disorder, severe anxiety, and agoraphobia. I’ve written three novels, of which has been self published. Leaving Hope has been published here and Small Dreams has been published here. I stopped writing more due to depression but I’m slowly, very slowly, working on a new book. My attention span stinks.

My oldest child is Kait (previously known as Emma). Kait’s twenty-four years old and dating J. She and J have an adorable orange tabby named Parrot and a tiny calico named Munchkin. They also have a smart and cuddly toddler M.

My youngest child is Colin (formerly Julie/Jeremy). Colin is twenty-two years old. When I started this blog he identified as bisexual then bigender, agender, and finally gender fluid. Now he’s female but has decided to stay appearing male and using he and him for pronouns because he wants to keep his fertility. I’m hoping someday he’ll feel comfortable enough to be Emma again.

Colin has been diagnosed with high functioning autism. He also struggles with anxiety and depression.

Colin is obsessed with electronics, especially computers, and loves rebuilding them. I constantly have electronic bits and pieces all over the apartment. He’s fascinated with anime and various podcasts such as Tim Pool and Shoe on Head. His goal is to someday work with computers, maybe as a programmer… hopefully something with robotics. Colin enjoys playing Five Nights At Freddys, Fear, Minecraft, and Garry’s Mod. His favourite colour is purple (with pink a close second) and he has a burning need to acquire every purple thing he sees, whether he needs it or not. Colin also loves driving RC cars, trucks, drones, and the occasional boat (almost as much as he loves taking them apart to see how they work).

All three of us are atheists, Kait’s vegetarian and I’m vegan.

The easiest way to reach me is by sending me a message via Facebook. The next best is to email me at secretmom@email.com. I also have a seldom used Twitter account, a regularly used Instagram account, and my above mentioned often used Facebook page. I don’t have any other accounts (other than my personal Facebook account which is under my own name including last names) so if you see another, please let me know.

I got added to a blogroll which requests being shared if added. I don’t actually have a blogroll, something I should add someday, but can share it here. Feel free to go wander through Transiness.

The graphics on my banner were all made by Studio Flergs. Run to her page… she’s got amazing stuff! Everything in the banner is from her Choose to Shine collection, except for the twinkle in Colin’s eye, which is from her contribution to the Commencement May Digiscrap Parade. 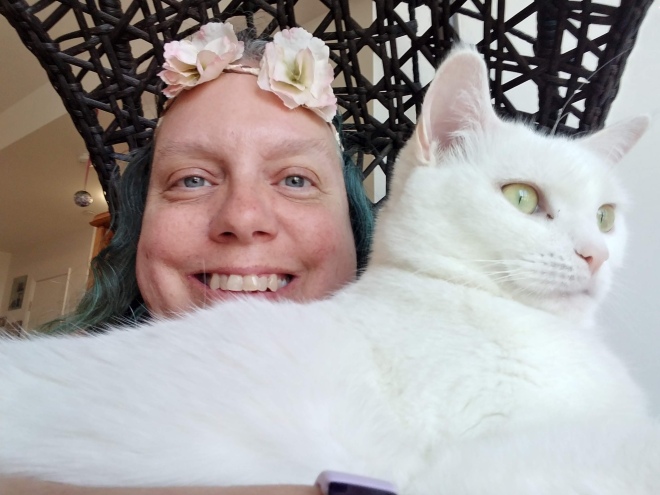 My nap buddy Angel. She's such a sweetie! #rescuecat #seniorcat #adoptdontshop
My social isolation buddy Smudge. #socialdistancing #socialisolation #catsofinstagram #rescuecat #adoptdontshop #durhamregionhumanesociety
My new picture. I love it! #wordart #dollarama #dollaramafinds #decor #myhappyplace
So many groceries. Such a long walk! #walmart #groceryshopping #vegan #veganshopping
My building is under lockdown. It feels so weird to see this sign in my elevator. #covid_19 #socialdistancing #socialisolation
Nothing like vegetable lentil soup on a rainy day. #vegan #yummy #soupweather