Yesterday I took a picture of Jeremy wearing zir new Hobbit door necklace. Instead of asking zir to smile, I told Jeremy zie looks beautiful then took the picture. Zie certainly is. 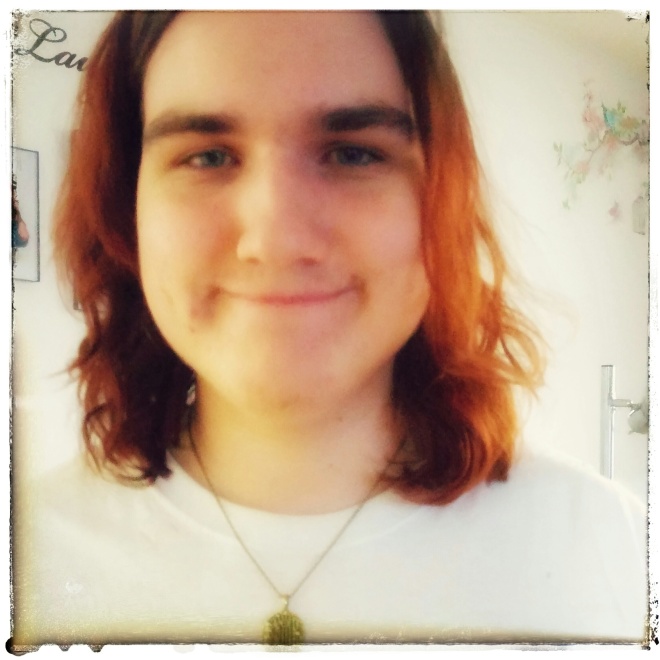 It was almost dinner time and Jeremy and I were on my parents’ couch. I was chatting on Facebook messenger with my friend Lenny while Jeremy played around with the panoramic setting on zir new phone. Light streamed through the living room window, highlighting Jeremy’s hair. Zie looked lovely. I quickly snapped a picture before we got up to make our plates.

“You look beautiful,” I said as I stood on tiptoe to kiss zir cheek. Jeremy usually smiles at that but today zie didn’t.

“Would you rather be called handsome?” I was surprised when zie nodded.

I was going to say more but zie’d walked into the kitchen with the rest of the family and I didn’t want to embarrass zir. Discussing gender and terms of affection in front of family would be embarrassing for everyone but I’m more concerned about Jeremy. I figured the conversation could wait until later.

Later didn’t come until we got back home.

“Do you remember the conversation we had about beautiful and handsome last month?” I asked almost as soon as we walked in our door.

Jeremy’s face had been cheerful and animated that autumn afternoon as zie gestured, describing something I can no longer recall. I’d watched for a minute then said zie looked handsome. Jeremy’s hands stilled and zie winced.

“I asked you if you’d rather be called handsome or beautiful and you told me you’d like to be called beautiful.”

Jeremy has a video zie wants to share with you today by Emma Blackery. Remember… you are beautiful.