It wasn’t the stop I’d planned to wait at. My original plan called for me to walk five more blocks but that would take me 10 minutes and my bus app informed me I had nine. So I hurried over to the nearest stop and stood beside the man who was waiting there.

It didn’t take long before he started to chat. His truck was in the shop, otherwise he wouldn’t be here waiting alongside me. A standard topic for drivers who find themselves catching the bus. They wouldn’t normally be there, hanging out on the street corner with us plebeians but circumstances happened. He’d just dropped his truck off and had been up since yesterday so was looking forward to getting home and getting a few hours rest. There wasn’t really any time for me to speak, not that I knew what to say.

Then he asked, “Do you know what bus to take to get to Taunton and Wilson?”

Taunton Road is in the north part of Oshawa. It used to be pretty much the edge of town but the city’s sprawled north of it now. And Wilson was to the east of us by about ten blocks. We were currently downtown, so nowhere near either road.

Three years ago he could have caught the 407 Ritson bus and it would have taken him straight down Taunton but, short of a time machine, that wasn’t going to happen. However, the 416 Kedron did go down there. Plus it left from the college bus loop. The 401 Simcoe, one of the main buses in Oshawa, ended there and it conveniently came to the stop where we waited. So I told him just that. He thanked me and continued on with his one sided conversation.

I was about to congratulate him when he continued. “My wife is indicting me. You know, for the house. You women have way too much power in this country.”

I silently cheered for his wife.

“See?” He reached into his pocket and pulled out a wad of money, sliding one twenty from the top. “Who’s on all your money?”

“See, a woman. That’s my proof,” he said this cheerfully, smiling the whole time. “Every time I look at money, I’m reminded of who’s in power here.”

The 401 bus arrived and he climbed on then back off within seconds. The bus pulled away without him.

“It won’t take you to Taunton,” I cautioned him. “But it will take you to Coldstream and Wilson.”

The 407 came along moments later. I got on first and settled myself while he sat down behind me a bit later. Two blocks later he was up and out of his seat.

“Where are you going?” I asked in bewilderment. He had at least another twenty minutes left before his stop.

“The (male) driver told me to go to Centre Street,” he replied as he slipped out the back doors.

Oshawa has one way streets through their downtown. Simcoe Street runs north and Centre Street runs south. There’s no way on earth he could catch a southbound bus on Centre to get to the north west part of town. No way at all.

I looked out the window at him standing there, still happy, clutching his transfer in one hand then settled back in my seat to go home. I wonder how long it took him to get to his? 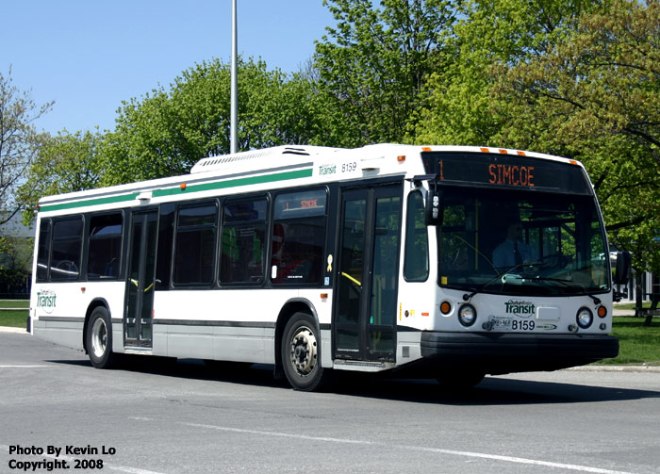 The bus he should have taken