It was Spirit Day and, in our city, also An Evening of Hope; a yearly event centered around the LGBTQ community. Every year it rains, as if the earth itself is remembering the lives lost. And every year there’s laughter, as we remember the ones still here. 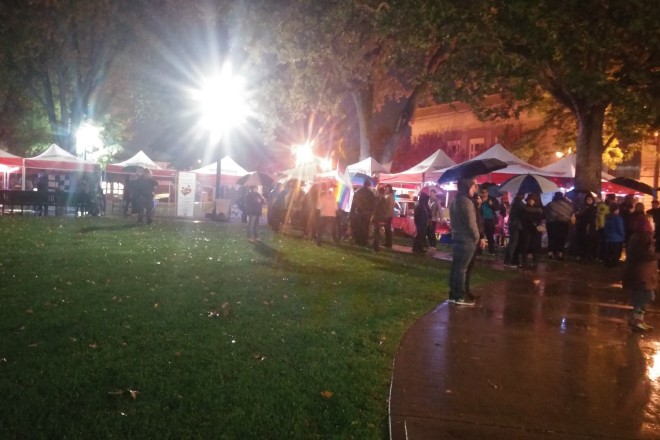 Soggy yet bright and cheerful

The evening opened with a Metis drumming circle 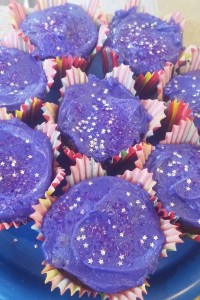 And plenty of baked goods 🙂

The bathrooms were liberated for the evening 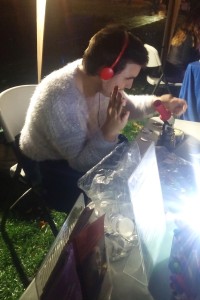 Jeremy was in their glory at our UU congregation’s button making machine. They cracked jokes and hammered down buttons for almost two hours… until the baked goods were gone and the pouring rain made everyone cold and tired. Then we headed home to warm blankets, hot drinks and, in my case, Pride Kitty… 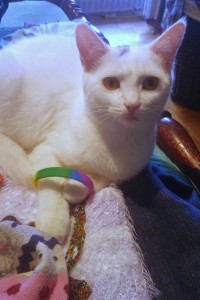 I’m sure she’d be a real party animal.

Until next year… *hugs* and stay safe!

I was going to write a blog post last night but I was exhausted and the words just weren’t making any sense so I watched Doctor Who instead. I managed to watch two whole episodes. Jeremy wanted me to watch a third but I figured zie didn’t want me passed out, drooling on zir shoulder, so I went to bed.

On Monday I volunteered to help out at this year’s Evening of Hope. It’s an annual event in our city, remembering LGBTQ people who have died by suicide or murder, and honouring people who have made a difference over the past year. My UU congregation has a button making booth where you can decorate your own button. Jeremy didn’t volunteer, instead I bribed zir to show up with the offer of a chicken or steak dinner. Not that I was extravagant, they were the best steak bits Tim Horton’s had in their warming tray.

Our booth was right beside the bandshell, the closest booth to the washrooms. Which is why I noticed an oversight. I asked who was in charge and got directed to a slightly frazzled looking gentleman on the stage.

“Excuse me? I was wondering if you have gender neutral washrooms this year?”

I was informed both washrooms were, in fact, gender neutral but the person who was supposed to bring posters to cover the male/female signs had forgotten them at home. So I offered to make some and he accepted… probably because he had no idea how bad my drawing skills are…

Just pretend the figure has arms.

Last year the organizers strung extension cords across the park allowing each booth to set up lights. This year they decided that would be too risky, much to Jeremy’s relief. Zie’d been panicking about the rain and those cords before we even reached the park. Of course that brought about a whole new concern for zir. What would we do for lights? Could they shine a spotlight on us from stage? Could we go back home and get our emergency light? After zie’d asked variations of these questions for several minutes, I decided to give everyone a break and take zir to view the other booths.

It’s a good thing each booth had a roof because the rain started coming down quite heavily. We ran from one both to another, eyeing the free samples and asking questions. Finally we reached Jeremy’s favourite booth, the one offering free cupcakes.

You can see how hard it was raining by the state of Jeremy’s coat. You can also see zir new sparkly purple tie 🙂

Jeremy headed home as soon as zie finished eating zir cupcake and I got to work making Lenny’s button. Zie’d asked me to design one for zir. Apparently Lenny wasn’t aware of my poor drawing skills either.

I had an idea in mind, sadly just not the artistic ability. However I tried my hardest and was able to make it at least recognizable. My biggest disappointment is that I set the button down on the table to take a picture and there was a leak in the tent… right where I put the button. So my picture ended up with water splatters. 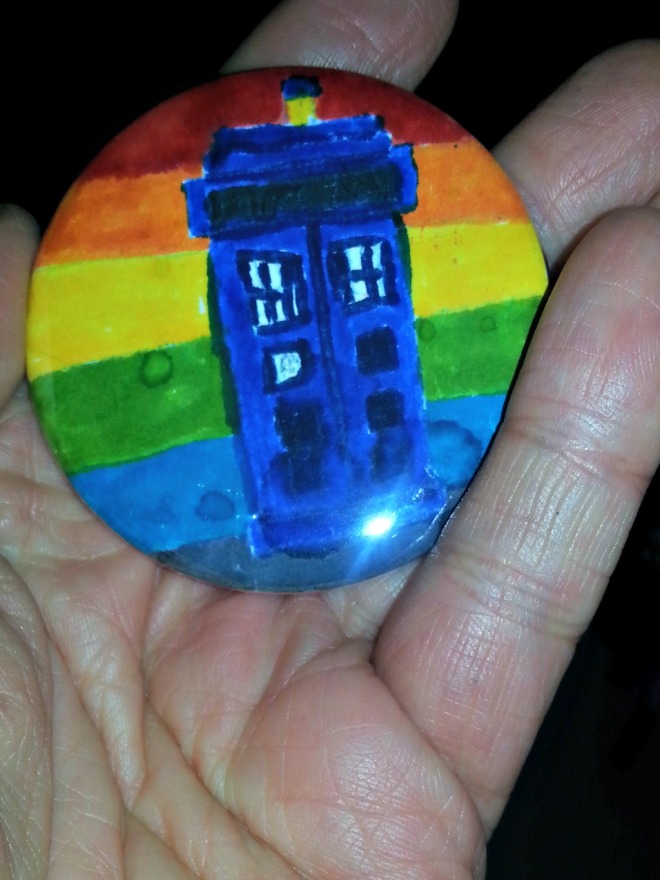 It’s a soggy TARDIS on a pride flag!

I was exhausted when I got home. I’d had choir practice on Sunday so I’d gone to bed later than I’d hoped. Then Jeremy woke me at 1am to say zie couldn’t sleep due to anxiety; zir heart was pounding too hard. I woke up at 3am when Jeremy made zirself tea then again at 3:40am when we had a brief power failure; Jeremy started yelling when all the lights went out. There were tears at 4am when Jeremy went into zir room and re-discovered the tea. Jeremy’s second hand Tassimo leaks and it had dripped all over zir netbook. It was fried. Completely and utterly fried.

My alarm went off at 4:45am. Technically. I shut it off at 4:44am as I hadn’t been asleep in well over an hour. All that kept me going that day was Advil and chocolate… and now I was home and ready for bed. I sat down at my netbook for a quick second as Jeremy looked up from zir video game.

“I don’t think that’s a good idea,” I replied, quietly stifling a yawn. “That would be better off happening in surgery with anaesthesia. It would hurt a lot otherwise.”

Jeremy nodded and went back to zir game while I headed off to bed. Later Jeremy angrily told me zie’d said it as a joke because zie was mad at zir video game.

Alrighty then. I’ve joked before about my metaphorical parenting book. Well it’s missing way too many chapters; I have no clue what’s going on.

*throws the book over my shoulder and walks away*

I had choir practice last night, which didn’t finish until 9pm. Which was fine except I needed to be up at 4:45am. I got home, read a couple of quick posts on Facebook, and headed off to bed.

Then I got out of bed to get my cat away from the closet doors… twice. She likes finding dark corners to pee. I’ve got Christmas presents at the back of my closet.

Then Jeremy came in to tell me zie couldn’t sleep because zir heart was pounding too much to sleep. This was around 1am. Back to school anxiety had settled in.

I woke shortly after 3am to use the washroom. I was just drifting back to sleep when I realized it was very quiet. That was when Jeremy started yelling for a light because it was really dark… way too dark and zie couldn’t find the emergency light in the living room. I crawled out of bed and handed zir mine. I was in the process of turning on my cellphone so I could set an alarm for work when the power came back on. Jeremy immediately followed. Zie excitedly explained that all the lights went out, even the ones behind our building. There are flood lights on the building behind ours… which means our apartment is never dark. Except for last night. Jeremy informed me zie was not going to sleep at all. This wasn’t a surprise.

I was dozing off again when Jeremy came back nearly in tears. Zie’d made a mug of tea in zir Tassimo and had forgotten it. Somehow the tea ended up spilling all over zir netbook. I thought back to that brief power failure. Jeremy had said something about the power light being off. I told zir to take the battery out and leave the netbook propped up for 24 hours so it could dry. Zie came back in 10 minutes later and stuck the netbook under my nose so I could smell how burnt it smelled. That was not a hopeful smell.

Twenty minutes later I turned off my alarm clock and got out of bed. It was set to go off in five minutes anyways.

Five hours into my shift, my manager asked if I wanted to go home early. Oh yes!!! I’ve taken an hour and a half long nap and am finally awake and 99% sure I’ve got legs. Or it might be I have legs and am 99% sure I’m awake. At least I don’t have to walk anywhere yet…

We’re going to an Evening of Hope tonight, which is a local event against homophobia and transphobia. Our UU congregation has a button making machine so we’ll be helping people make buttons. Now I just need to find something purple to wear. I’m assuming the purple circles under my eyes don’t count.

Ironically I think Jeremy’s more awake than I am.