I noticed his eyes first, rheumy blue with a vacant gaze. The bright orange safety vest was obvious, I’ve seen several seniors wearing them lately. Then I noticed the cane he clutched with both hands. With that, I turned my attention away, back to my conversation with Kait.

A few minutes later, the man across the aisle from me crouched down on the floor in front of the senior. His shoes were untied, something I hadn’t noticed. The man tied them both neatly then the senior looked down at his newly tied shoes and gave the man a shaky wave. And that was that.

Several years ago I was on the bus going to work. It was pitch black outside and freezing. My main goal was to warm up beside the heater. The driver stopped at the bus stop and I looked up, noticing a car in a nearby parking lot with the indoor lights on. An elderly man emerged, briefcase in hand, and started running toward the stop just as the last person boarded. Then it happened. His feet hit an ice patch and went right up in the air before he crashed down hard. I lept from my seat and yelled to the driver to stay and that a man had just fallen.

The man was obviously sore but just wanted to get on the bus. I tried to help him up and couldn’t. Thankfully a big, heavily tattooed man got off the bus and came over to help. Between the two of us he was lifted to his feet and (thankfully) he was able to walk to the waiting bus.

Random acts of kindness happen all the time. Lifting a row of seats up so a passenger in a wheelchair can board the bus safely. Paying a teen’s fare. Helping carry a senior’s groceries to the car. Our world is made more beautiful with each act.

It is so easy to fall into the trap of assuming that most of the world is filled with horrible people, even though that’s not the case. I think media plays a big role in this. Drama and shock sell so they write articles about things that are dramatic and shocking, which means that’s all people see and read. Then people assume that’s all there is out there. But it’s not.

We need to pay attention to what’s going on around us. The young mother interacting with her baby, the senior’s little dog who patiently waits for his owner’s faltering steps, even though it means taking a tiny step and waiting a minute. All the myriad of volunteers. This world is nowhere near as bad as we think. We just need to take the time to notice the good. We need to be the good. 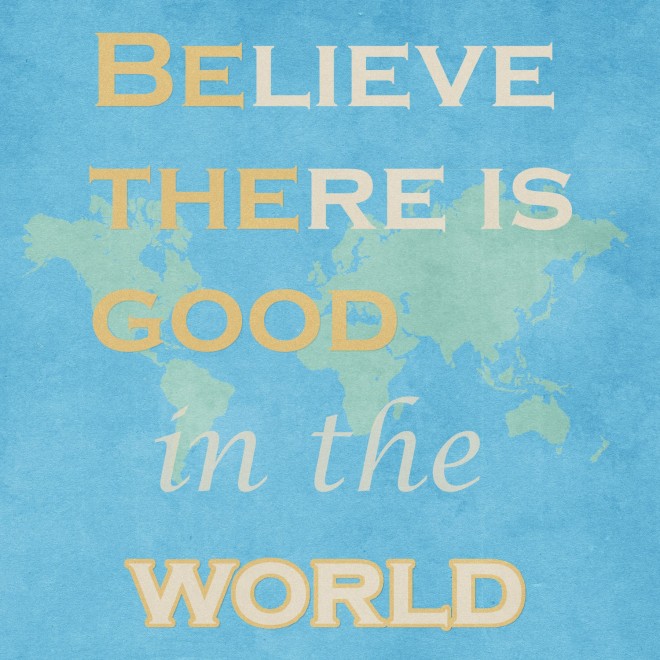