We had a family dinner today and both my Mom and I were panicking for different reasons. My Mom was worried because this was the first dinner since Emma moved out (after a deadline was set for her to leave) and she didn’t know if dinner would end up being awkward or tense. I was worried because my parents don’t know about Jeremy’s indefinite suspension from school and I couldn’t figure out a way to tell them. Jeremy wasn’t exactly a sweet and innocent victim to begin with and, once Jeremy’s panicked reason to refuse those ballet stretches was removed, zie comes across as a complete asshole.

I could already hear the conversation, starting with shock that zie didn’t just do the stretch because “it wasn’t going to kill him” then moving on to horror that zie argued with the principal. I know where Jeremy’s coming from because zie doesn’t sit alone with zir thoughts ever. I love going for long walks in the woods, with nothing but nature sounds and my own thoughts. Jeremy can’t handle a two minute wait for the bus on zir own without music or a video game. Twenty minutes to an hour of sitting in an office with nothing to do but flip through a magazine would have been torture. My parents’ reaction would have been to suck it up and deal because zie’s seventeen. I agree that Jeremy needs to learn ways of coping with zirself without panicking; I just don’t feel sucking up’s going to work well. Leaving school when feeling stressed was part of Jeremy’s safety plan last year but I know my parents would be on the “just suck it up” bandwagon there too. School’s not stressful… just deal.

This would end up as an hour of listening to how horrible Jeremy is and how zie’ll never have a job or any sort of normal life, which makes for an awful visit. So I decided it was not happening. Of course I screwed up dismally when I decided this because I forgot Jeremy was not involved in my internal frettings and conversation.

“Okay, so it didn’t happen,” I blurted. “No indefinite suspension… no leaving school.”

“Really?” Jeremy said hopefully. “You mean I can go back on Monday? It’s all done?”

“Oh sorry hon,” I explained. “I meant we aren’t telling Nana and Grandad about the suspension. As far as they know you’re still going to school and everything’s fine.”

I shrugged and gave Jeremy a half smile. “We’re already keeping a huge secret from them anyways. What’s one more?” Zie grinned back.

Mom was waiting at the front door, watching for us as we walked down the street. She had pop chilling in the fridge, a vegan casserole in the oven (alongside the meat one) and Jeremy’s favourite ice cream bars in the freezer. Dad reclined in the chair in the living room and greeted us as we walked inside. Emma and Mark arrived a short while later.

We had one brief mishap. Jeremy was chatting in the kitchen with my Mom when I heard her voice raise.

“…those sort of things are not talked about at school,” she explained. “It might be fine to talk about gender at church but school’s different. They have to be neutral and gender is simply not acceptable to discuss. The teachers shouldn’t have to deal with stuff like that…”

“They’re mandated by law to deal with gender issues,” I commented as I walked into the room. Jeremy stood silent. I figured zie’d probably brought up the topic to test the waters. It obviously hadn’t worked well.

“It’s something better kept private and not mentioned in school at all,” she retorted. “It’s not school appropriate.”

“Jeremy? Emma was looking for you. I think she had something to show you.” I hoped Emma would play along.

“Really?” Jeremy turned and hurried out. I followed.

Emma wasn’t downstairs at all, she’d gone to use the washroom. The poor kid opened the door to find both of us standing right there. Jeremy was all excited because zir sister had something to share while I was winking so quickly it probably looked like I was having some sort of seizure.

“Nana was talking about gender with Jeremy,” I quickly explained. “I said you had something to show zir.”

She stared at me with more than a little irritation. “I don’t have anything to show. I don’t know what you’re talking about.”

“It’s an excuse,” I stressed. “It doesn’t matter if you know where it is.” I finally saw the lightbulb turn on and they headed off to Emma’s old room.

The rest of the night went wonderfully. We chatted and laughed about a variety of subjects including a long discussion regarding a giant chicken mobile on a farm north of here.

“This dinner went so well,” my Mom said happily as we said our goodbyes. And it did.

I uploaded my pictures when we got home and shared a photo from our family dinner on Facebook. It’s one of the rare good shots of my mother. She has this unusual talent of looking just fine in the viewfinder then looking absolutely horrid in the photo. I’m talking sunken cheeks, half closed eyes, partially open mouth… you name it, it’s happening in the photo and it wasn’t happening half a second earlier. Most times when I share family photos they come with the warning of “my Mom doesn’t actually look like that.” This photo really does look like her. Then I showed Jeremy zir birthday scrapbook page. I used to scrapbook the day I took the pictures; right now I’m three months behind and haven’t printed out a page since February. There is a plus side to my huge whopping delay though.

“See, I used zir on your page,” I pointed out. Jeremy beamed then I closed my scrapbooking program so zie could have the desktop.

“So tomorrow I’m going to out you at church. Is there anything in particular that you want me to say?” I asked then watched as Jeremy nearly spat cereal across the living room.

This was a continuation of a conversation we’d had that afternoon… not something I’d suddenly thrown at zir. I offered to be the one to explain exactly what non-binary trans is then share Jeremy’s preferred pronouns and how to use them in a sentence… which means Jeremy should (hopefully) miss a good chunk of the questions. Zie only goes to the youth group and the occasional potluck so zie won’t be there. Plus we go to a welcoming UU congregation so, presumably, everyone there is likely to at least attempt to use the correct pronouns.

“I can’t think of anything,” Jeremy replied once zie’d swallowed zir cereal and was past the risk of choking. “I’m sure you’ll say everything.”

I stink at public speaking. I flipped on the dining room light then watched as Jeremy glared.

“I’m just getting some chocolate then I’ll turn out the lights so you can watch your video.”

“Can you get me some too?” zie asked hopefully.

“The other zir,” Jeremy said with a smile, which quickly widened. “The word zir sounds like an alien. A really super cool alien.”

Also, I don’t actually have a conclusion but I do have two photos I took last night when we walked over to our local greenspace in an attempt to see the Northern Lights. We live in an urban area and, despite the solar storms, were rated for a poor chance of viewing. Chances are the whitish film in the sky was simply clouds reflecting all the city lights but it was still neat. Enjoy 🙂 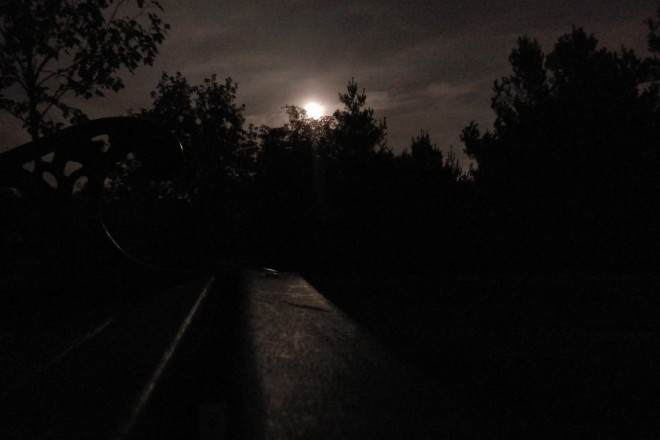 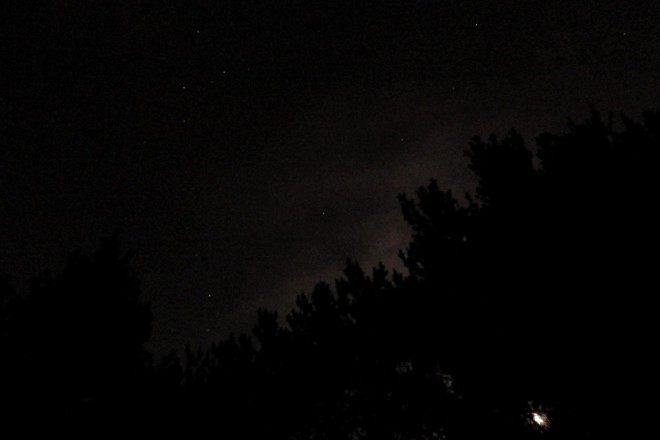 New leaves in my backyard. I love this little path ❤
Do you see the bunny? There was a second one but it jumped into the burrow right before I took the photo.
Make a wish! I found the first wishes of the year in my backyard ❤
Can you find the cat? Please don't let her know when you do, she thinks she's being sneaky. Lara's also why I check before closing drawers LOL
Would you look at the time. It's dinner o'clock! Three of my favourite foods on one plate and there's blood orange balsamic vinegar on the chips.
Taking the time to stop and smell the rose 🌹 Loblaws was giving away roses for Mothers Day and I picked this sunny yellow one. The cats liked it too and Lara thought it was tasty! It's now in view but out of reach on the fridge.