I hear a lot about support and lack thereof. Reading posts by people who have cut family off entirely for not supporting their trans child. And, depending on the family, I get it. But what’s support?

Julie (Jeremy) informed me a few days ago that her Nana is supportive of her transitioning but that Grandad walked past and told her that he will never see her as female, she will always be male to him. That’s not supportive. And yet…

We see them every single week and talk to them daily. They bought us a tent as a very early joint birthday present for our family camping trip and are going to drive us there and back. They listen to Julie’s talk about computers and support her dream of going into robotics. They have been there for Julie her whole life.

Transitioning is a big thing but it’s not the only part of Julie’s life and, thankfully, Julie knows this. Her response to my Dad’s comment? A smile and the remark, “he’ll look silly saying I’m a man once I have breasts” followed by, “it’s no big deal though, he’ll change his mind when I start looking more like a girl.”

Every change takes time to get used to and this one is no exception. My Dad will get used to Julie’s transition eventually. Until then he’ll continue to be as supportive as he can.

Edited: It’s funny, I was so sleepy last night but at the same time so determined to get this post up. It had to be up as close to the 6th as possible and the 8th, even though it was only a couple of hours away, was way too far away. Which proves that nothing brings out my inner toddler more than being overtired. I woke up this morning and when I looked at this post, all I could think was, “It’s a wonder I didn’t fall asleep at the keyboard.”

So I’m scrapping what I wrote previously (which was only five lines). Actually, the layout for Leelah is a work in progress too. My main computer is in the shop for at least another week so I have no access to my scrapbooking supplies. The layout was made with what I could download last night and I want this layout to be the best I can do, not the quickest (I will have more elements by the same designers). At some point I’ll post my final version as well, although that won’t be until the end of January.

Emma’s hand is on the left, showing her rocking her hot pink nails, while Jeremy and I are on the right. It was wonderful seeing all the pictures on Facebook yesterday (and on the 6th) of families painting their nails. I hope Leelah’s siblings are able to see the support and love being shown toward their sister and gain some comfort from it. 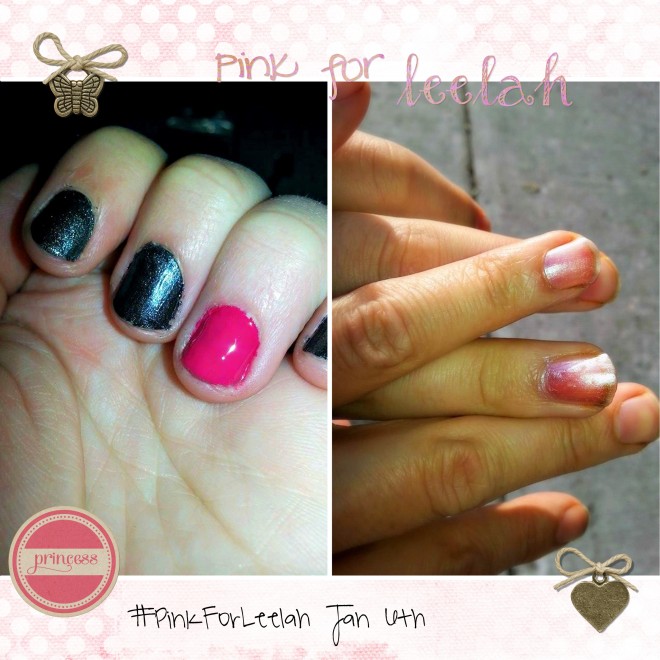 The first time I heard that name was with Emma. She’d been dealing with several issues; bullying, anxiety, and an overwhelming conviction that she’d made her Dad disappear and he was never coming back. I asked the school’s social worker for help and was assured that Emma and I talked well so we didn’t need any outside help. This was flattering but not useful. I requested an assessment from the school psychologist and asked for more help. Gatineau was recommended and an assessment was scheduled immediately.

A stern looking older man met us outside their interview room. Emma immediately froze. He stared at her then barked, “She’s obviously depressed.”

“She’s very shy,” I replied as we edged past him into the room. “She’s always been scared of men. Besides, she was laughing and joking around just a minute ago.”

I looked back to see him glaring at me. “I’m the psychiatrist and I know depression when I see it. She’s depressed.”

His tone said he felt that was clearly the end of the discussion. I figured it wasn’t worth starting off with an argument, not when I was there to get Emma help so shut my mouth.

The room was filled with a huge circle of chairs and a fish tank, which looked oddly out of place. We all sat near the door, the fishes swam alone on the other side of a vast expanse of chairs. There was a man who sat across from us with a pad and pen, obviously ready to take notes. He didn’t make Emma any more comfortable although, to be fair, she could hardly get any less comfortable.

Then I thought of something else. “Before we begin, I should let you know I’m having Emma tested for Aspergers.”

The psychiatrist looked over at Emma then shook his head. “She definitely does not have that,” he replied haughtily.

I began to wonder if it was possible to pull a doctorate of psychiatry out of a cereal box. The psychologist had me fill out checklists that started almost from conception and sat with Emma for hours. Meanwhile this doctor had diagnosed her in under two minutes without speaking to either of us or even attaining eye contact with her.

The doctor settled on play therapy for Emma along with a parenting group for me. I wanted Emma to get social skills help and was assured that would come as long as I joined their parenting group. I agreed and we were placed into art and group therapy at the same time. The only caveat was I needed to miss the first three sessions as my parents were away and I needed them to watch Jeremy. I was assured that was fine.

I knew immediately the group was a poor fit. Emma was prone to slamming her bedroom door while yelling, “I hate you! You’re mean!” Meanwhile the rest of the group were dealing with youths who set fire to the living room, robbed stores, and smashed furniture.

The weeks went on. Emma enjoyed her therapy, coming home regularly with crafts, while I listened to the other parents and offered any support I could. One day our group mediator was late and conversation immediately moved to the psychiatrist.

No one in the group liked him. They disliked his attitude and distrusted his diagnoses. I commented that Emma was diagnosed with Aspergers** but hadn’t got any of the social skills help I’d been promised. The mediator stepped into the room to tell me I was wrong, their psychiatrist had ruled out that diagnosis, and my diagnosis couldn’t count because Aspergers was only diagnosed by a psychiatrist. I pointed out that he made that diagnosis in less than two minutes, without speaking to Emma; meanwhile the psychologist spent hours with her. He retaliated, saying their art therapist had also spent hours talking to Emma and agreed with the psychiatrist. I pointed out that their art therapist wasn’t a psychiatrist either, so if I couldn’t go by a psychologist’s thorough assessment, he couldn’t use six hours of art therapy for a diagnosis either. But she was well respected and spent many hours with children… and so was the psychologist. The mediator told me they’d never agreed to any further help for Emma and certainly not with social skills; they didn’t even offer it.

Didn’t even offer it. What the hell was I doing there then? I sat through the rest of the session feeling numb then talked to Emma about her sessions. I’d thought the therapist was letting Emma discuss her feelings about her father and school. Instead she’d been spending therapy listening to why her art therapist felt she didn’t have Aspergers. I pulled us out of Gatineau.

I got a withdrawal letter a month later, claiming I’d missed almost half the group sessions and had been a reluctant participant. I looked at the dates and realized he’d not only counted the initial classes but a full month of sessions after we’d left. I vowed I’d never go back to the agency.

And then came the chance for a new class for Jeremy. A smaller class setting, an LGBTQ friendly school, a program that offered a chance to earn school credits, and it was brand new and barely had any students. Jeremy could get in almost immediately. But the class was run by Gatineau.

I stammered that I’d been there a few years ago and had not been impressed with the service, only to be reassured that they had almost all new staff and no longer had that psychiatrist.

We had our intake assessment. The new psychiatrist was cheerful and engaging, while Jeremy was in amazing spirits and responded quite animatedly. I was told a second appointment would be set up “next week” between us, Gatineau, and someone from Jeremy’s school; probably zir teacher.

There was a message from Gatineau today, wanting to arrange Jeremy’s counselling sessions. I called them back and was told they could only offer an appointment mid-day, which means Jeremy is going to miss a full day of school every week on top of what zie’s already missing due to anxiety. Then I asked about the class.

“Oh, umm, yes. Well, that class is full right now so Jeremy’s been placed on a waiting list. We’ll let you know when he gets to the top.”

“I’ll have to call [school board member] and try to get Jeremy into a different class then. Zie needs to get out of zir current class immediately.”

“Oh! Oh!!!” She sounded shocked and a bit worried. “I’ll have to talk to J and see what she says. I’ll let you know next week where Jeremy is on the list and if we know how long it will take for him to get to the top.”

So yet more waiting. Waiting for Gatineau and waiting for the school board member to call me back.

There’s a meeting on Thursday between the school board and PFLAG to address how the board can improve how they work with LGBTQ families. I figure we’ll have quite a lot to discuss.

* Gatineau is not the real name of the agency
** Emma was diagnosed with Aspergers through the school board. However it is not a diagnosis she agrees with and she’s subsequently been diagnosed with Borderline Personality Disorder and depression. I’ve also since discovered that Aspergers and anxiety have a lot of similar symptoms.