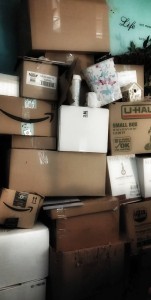 There’s ten more days until I move. Ten measly days. I’ve got a wall of boxes in my bedroom and so much more to do.

Colin got told he had to clean up all his belongings before the agency who’s helping him will help him pack and we’re still waiting to hear about a place for him. He has a packing appointment on Tuesday and I’m crossing everything I own that he has a place. He doesn’t have to be out of here until the 29th but I’d much rather him out as soon as possible.

The cats see this as an amazing adventure. They rip the tape off boxes and dive inside and, mostly Smudge, climb to the top like they’re scaling Mount Everest. It’s going to be a huge shock for them when the boxes are all flattened and taken away.

My psychiatrist is worried about my anxiety, visibly worried. Worried enough that he’s stopped tapering me off Effexor and cut it out entirely so he can put me on Zoloft right away. I wake up multiple times a night and can’t sleep because I’m so anxious then I’m anxious all day. Hopefully the move will help. That phrase has become a mantra. Hopefully the move…

And here I sit, rocking every time I stop writing. I think I’ll put that pent up energy to good use and do some more packing. And tomorrow I’m into the single digits.