There’s a blog post by someone named Lindsay that I’ve seen a few times. It’s titled I am Ryland. I’ve ignored it until now simply because it was written back in 2014 but it’s still going around (and around… over 10k times). In it, the author explains how her gender nonconforming childhood meant she was exactly the same as the transgender boy Ryland:

The thing she fails to notice is her parents treated her the same way Ryland’s parents treat him. They listen to him and follow his lead on who he is and where his interests lie. My parents were the same way. 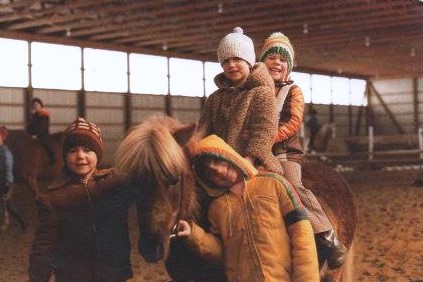 I’m in the yellow jacket

I was a little girl who dearly loved most “boy things”. I climbed trees like a monkey (and roofs and the fences behind baseball diamonds). I collected worms, preying mantises, and spiders. I don’t think my sister Karen will ever recover from my spider collection. If we needed to dig the deepest, run the fastest, or swim the farthest, I was there. My best friends, right up until puberty, were boys and they remained mainly boys until I was an adult. Even now I’m equally comfortable with male and female friends.

Like Lindsay I wanted the privileges of being a boy. I wanted to be picked by my grade five teacher to run across the street to buy treats for the class… a reward that was supposed to be random but only went to boys. I wanted to be a tree surgeon when I grew up; I couldn’t imagine anything better than climbing trees for a living. I thought being a garbage man sounded cool too (driving that big truck) but there was the little word man which stood in my way.

The one thing I didn’t want was to be a boy. I wanted to be myself, a tomboyish girl. I wanted to run and climb and collect bugs without being told to settle down and be a lady. Ladies were boring. They sat and talked and did nothing else. They certainly didn’t lie on the ground to catch bullfrogs and they screamed when they saw mice and snakes, even though they were cool. I wanted to grow up to be a woman.

What Lindsay misses is Ryland isn’t her. He’s not a tomboy who wants male privilege. He’s a boy. He’s not confused. He’s not being ignored. And if something rare happens and he changes his mind at puberty, it won’t be traumatic. He’ll just get a new wardrobe and haircut then go on with his life.

I’m glad that both Lindsay and I had our chances to have rough and tumble childhoods. I’m glad we both had the choice to be tomboys and grow up to be women. And I’m glad Ryland’s parents are giving him the same chance to be himself.