My name is Kathleen (formerly known as Michelle). I am technically middle aged. I’m planning on living until I’m at least 100 so I’m at the halfway point.

I’m an atheist and a vegan and my favourite colour is teal. Well, not really. My favourite colour is iridescent but I’ve been told by umpteen billion people that’s not really a colour so I just say teal now. I’m a demiromantic,   panromantic asexual (complete with five cats). I described myself as boring once and was promptly told I’m too colourful and sparkly to say that, which is one of the nicest things anyone’s ever said about me. I tend to wear lots of bright colours, mismatched socks, and my running shoes are glittery. I’m autistic and struggle with major depressive disorder, severe anxiety, ADD, dyscalculia, and agoraphobia. I’ve written three novels, two of which have been self published. Leaving Hope has been published here and Small Dreams has been published here. I stopped writing more due to depression but I’m slowly, very slowly (glacially slowly), working on a new book. My attention span stinks so it’s taking a long time.

My oldest child is Kait (previously known as Emma). Kait’s twenty-five years old and dating J. She and J have an adorable orange tabby named Parrot and a tiny calico named Munchkin and kidlets of anonymous ages and amounts.

My youngest child is Colin (formerly Julie/Jeremy). Colin is twenty-four years old. When I started this blog he identified as bisexual then bigender, agender, and finally gender fluid. Now he’s female but has decided to stay appearing male and using he and him for pronouns because he wants to keep his fertility. I’m hoping someday he’ll feel comfortable enough to be publicly Emma again. He doesn’t speak about being female often these days and is deeply invested in equal rights for men but does mention it from time to time.

Colin has been diagnosed with high functioning autism. He also struggles with anxiety, ADHD, and depression.

Colin is obsessed with electronics, especially computers, and loves rebuilding them. He’s fascinated with anime and Reddit’s MRAs and Feminist boards. His goal is to someday work with computers, maybe as a programmer… hopefully something with robotics. Colin enjoys playing Minecraft, Garry’s Mod, and hanging out with Dogmeat in Fallout. His favourite colour is purple (with pink a close second) and he has a burning need to acquire every purple thing he sees, whether he needs it or not. Colin loves to garden and is determined to grow tomatoes this year even though he hates them. He currently lives in his own apartment in a group home for autistic adults out in the middle of nowhere in a house with a pool and two ponds and, most importantly for him, unlimited internet.

His move leaves me in an empty nest (aside from my five cats) I’d say I miss him but he calls at least twice a day and messages in between LOL.

All three of us are atheists, Kait’s vegetarian and I’m vegan.

The easiest way to reach me is by sending me a message via Facebook. The next best is to email me at secretmom@email.com. I also have a seldom used Twitter account, a regularly used Instagram account, and my above mentioned often used Facebook page. I don’t have any other accounts (other than my personal Facebook account which is under my own name including last names) so if you see another, please let me know.

I got added to a blogroll which requests being shared if added. I don’t actually have a blogroll, something I should add someday, but can share it here. Feel free to go wander through Transiness.

The graphics on my banner were all made by Studio Flergs. Run to her page… she’s got amazing stuff! Everything in the banner is from her Choose to Shine collection, which no longer seems to be available but she still has amazing stuff. 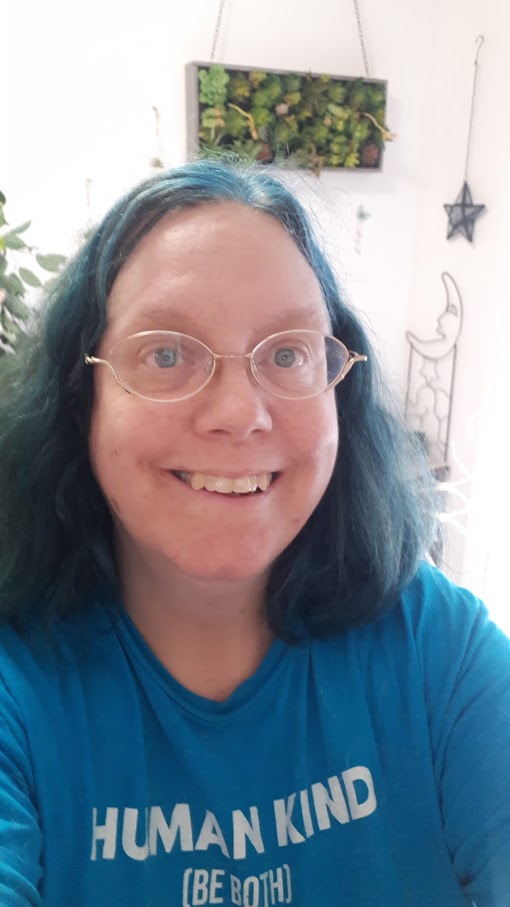 These two are just the cutest 😍
I got to see this little guy yesterday on my evening walk. He flew down right beside us!
Awww... my dinner loves me ❤
I bought myself a little plant 🪴 baby at FreshCo yesterday. Lara *loved* it, at least until I quickly moved it away. She loves anything remotely edible. Sam is a cobweb hen and chicks succulent and already has a bunch of babies. I bought the ceramic pot and plate at Winner's after dithering for a while and checking size requirements. And, don't worry, Sam is cat safe (although I'm not sure if the cats are Sam safe).
Eeeee... look what I got in the mail today!!! My asexual shirt!!! It's so comfy!
Hard to believe this is at the intersection of two busy roads (minor highways) and between downtown and the big box stores. Someday it'll be developed, hopefully not soon!